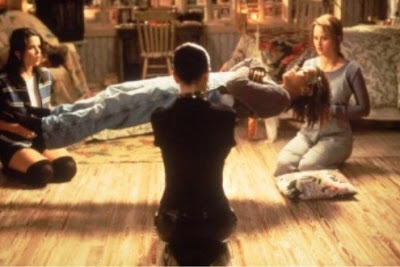 On Saturday, instead of going to an epic party, a few friends and I stayed in, made these drinks and rented The Craft.
Ladies, it's even better than you remember. Fairuza Balk really brings it here. It made me wanna dust off my old plaid skirts and knee highs and stick plastic baby barrettes in my hair.
And I'd argue that it sent a far better message to the youth of our time than, say, Twilight sends to young ladies of today. Instead of the (dull but secretly special) protagonist being completely emotionally and physically dependent on some sparkly male, this movie's all about female friendship and empowerment. Although I guess once they do get "empowered" everything goes to hell and they all turn on Sarah and convince her horrible things are happening and then try to outright kill her.
But, you know, before that part.
Posted by Annie at 10:14 AM No comments:

Email ThisBlogThis!Share to TwitterShare to FacebookShare to Pinterest
Labels: Life

Here's a costume idea for those who read a certain kind of comic book, the kind that's rarely even referred to as a "comic book," but rather, "graphic novel." You know what I'm talking about. They feature cleanly drawn black and white characters with believable hairstyles and no superpowers beyond preternatural self-reflection.

I love them so much! 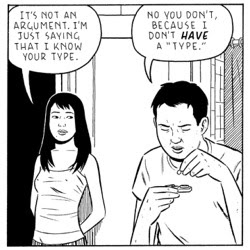 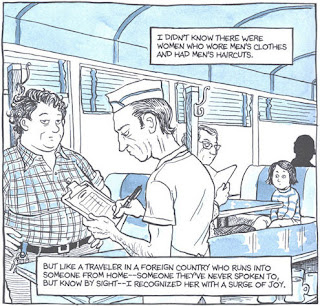 Last year, when I was still within the nurturing bosom of writing school, I was working on my own graphic stuff: 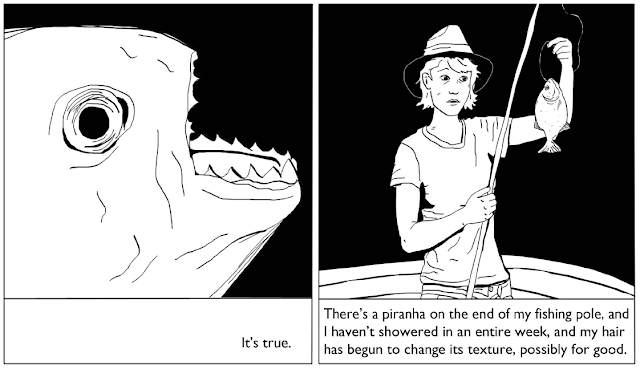 So I thought it would be fun to dress up for halloween as myself in my graphic memoir: 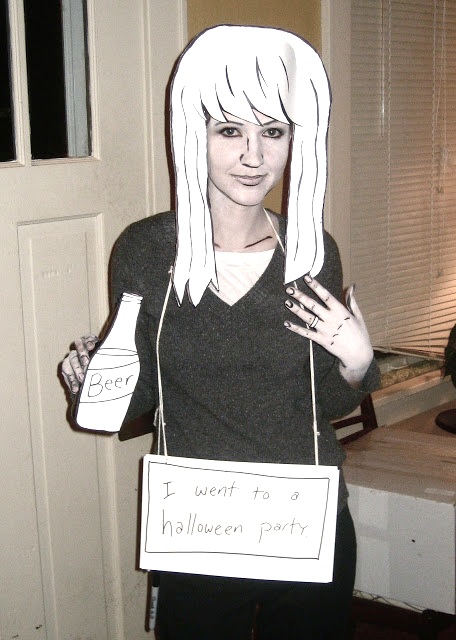 (I wish my hair was this big)

It is a very easy costume. Here's how to get the look!

1) First, select black, white and gray clothing that looks like something you would actually wear. (You don't want to be mistaken for a mime.)

2) Next white out your face and hands and any exposed skin with drugstore clown makeup, then dust over that with baby power.

3) Then take a black eyeliner and draw anywhere a line would be in a drawing, including along your jaw and under your nose, and between each finger on your hands.
Here's a dubiously helpful example of where to put the lines. Pro tip, don't bother with your smile lines, you'll end up looking like a crone. 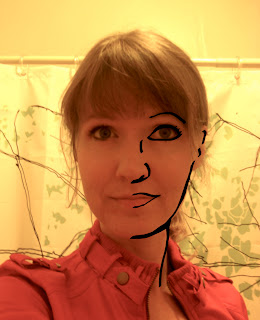 (The best part about this costume is you don't have to mess around with complex shading dots, which are really hard to get right, and often end up looking like small pox anyway.)

4) Next, make your props out of poster board. I drew a big head of hair like I've always wanted, cut it out, then hot glued it to a headband. Then I drew a beer and attached a little loop of paper behind so it could slip over an actual beer. Add any paper accessories you like, the more the better, in fact, as you are going for a 2D image here, and the paper really helps people get it. (I even made a paper wedding ring, mostly because I was a newlywed, and we are very annoying that way.)

5) Finally, and most importantly, make your captions. I cut down about a dozen sheets of poster board, drew a rectangle in each one and strung them together at waist level, along with a sharpie on a string. I wrote the first one, so that people would get the idea, but kept the rest blank. All through the evening, other revelers could come up and write a caption about what was happening, thus narrating the memoir. Things got pretty weird! But also fun! 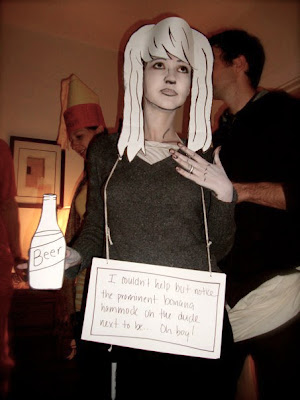 (Subtitle: This blog was never meant to be so nerdy, I don't know what's going on.)

Hey! Someone had a meme party! I found it amusing! 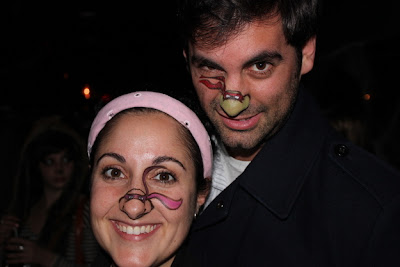 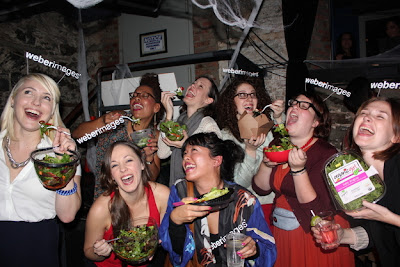 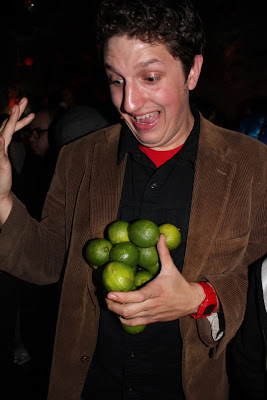 Why can't I hold all these limes? 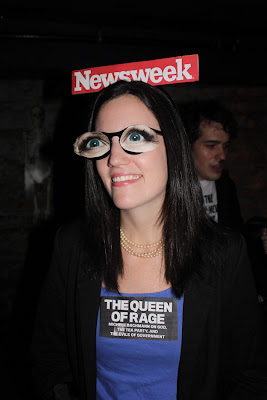 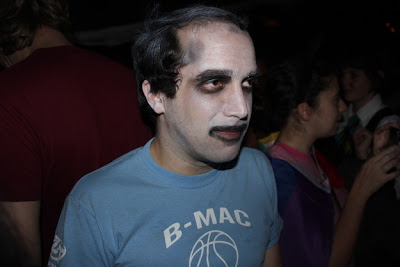 I like turtles!
I love you, the internet, but my next post has got to be about like, farmer's markets or something.
Fall foliage!
Posted by Annie at 12:12 PM No comments:

Who needs to hang around? 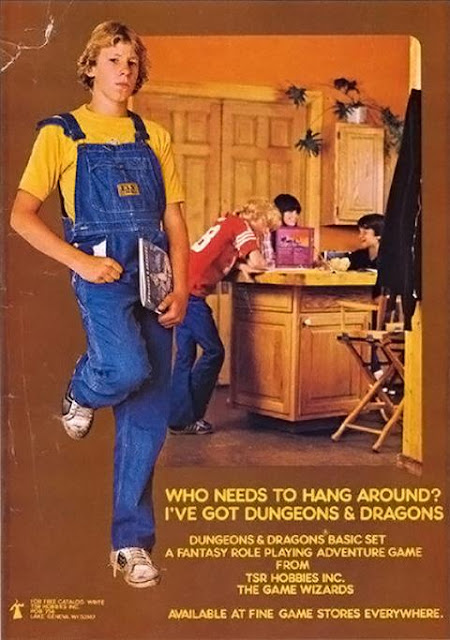 Bread that is also a bear

My friend Amy just sent this to me. 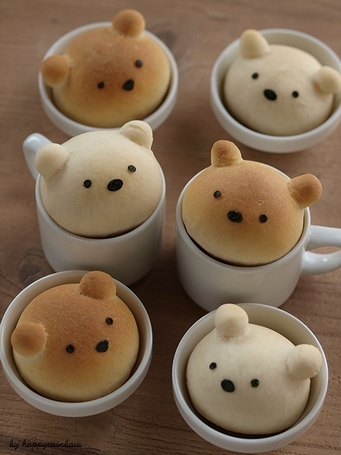 They are Bears Bread.

Take a look at this little guy. 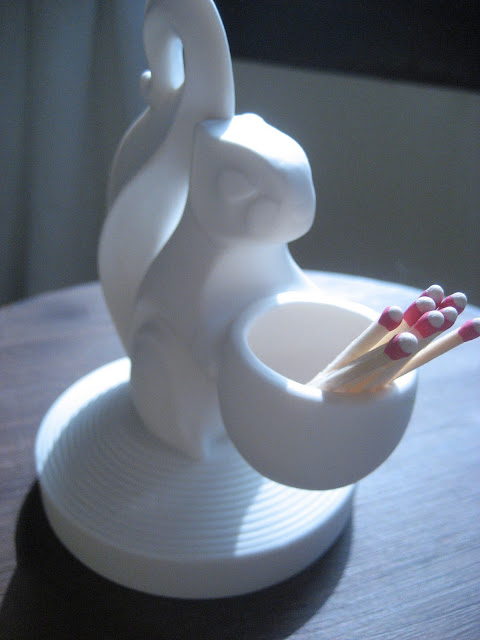 Why, it's a little ceramic squirrel, holding an acorn-full of strike-anywhere matches.  And he seems to have a textured base upon which to strike said matches! 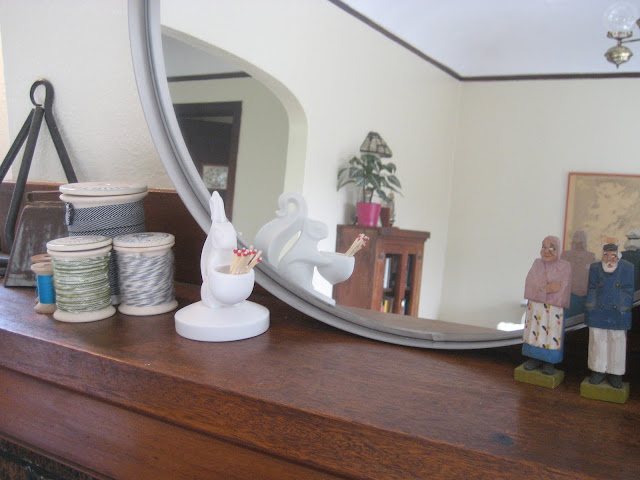 It's called, well, a match strike, and it's totally a real thing that people used to have in days of yore.

Darling Jonathan Adler has resurrected the idea and oh how I adore him.


Form, function, etc. We still don't even have things like bedside tables at our new place but we have a match strike.

Er. Or should I say, we have multiple match strikes.

After I learned about the concept, I immediately went hunting for more, and then I accidentally bought this amazing little bronze kangaroo off Etsy. 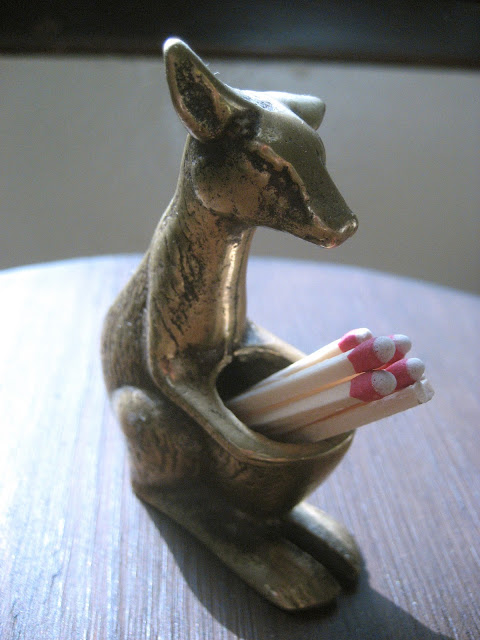 That face! That pouch!

Do I actually need to say anything to justify this purchase?

I didn't really think so.

My sister just informed me that she checked out my blog, read my bio, and for a moment thought it read, "Lover of husband, dog, and lost angels..." 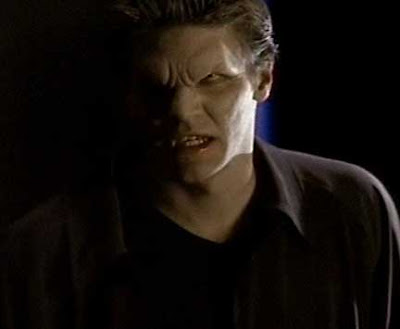 Email ThisBlogThis!Share to TwitterShare to FacebookShare to Pinterest
Labels: buffy

"This urge to define generations is also about a yearning for a collective memory in an increasingly atomized world, at least where my generation is concerned. Indeed, where the Millennials tend to define themselves in terms of the way they live now, people in my cohort find fellowship more in what happened in the past, clinging to cultural totems as though our shared experiences will somehow lead us to better figure out who we are."
Not sure if this argument  is completely sound, but Jordan Catalano!

Can I get a microgenerational fist bump, here?
Posted by Annie at 11:09 AM No comments: 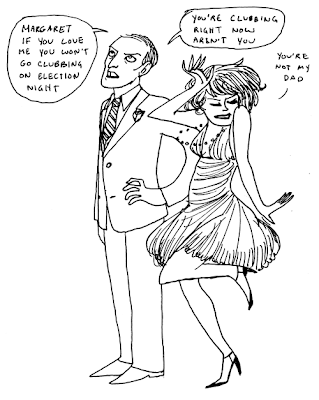 I was planning to blog tonight about the hilarious and talented Kate Beaton and her fantastic comics. I imagined you'd all go out immediately and buy them, then come back here and leave breathless thank yous in the comments section, and her book would shoot to the top of the NYT bestseller list and I'd feel all smug about supporting young talent etc etc.

Then I checked her blog and noticed that, what do you know, her book already has hit the number one spot on the NYT bestseller list, and oh look at that, my blog has three posts and a total of two followers. 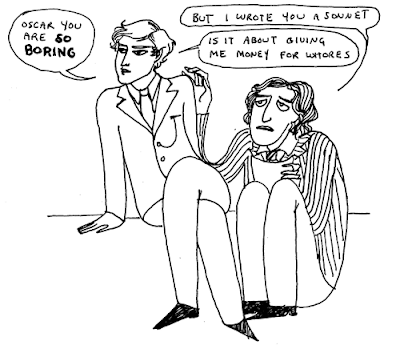 Well, just in case you haven't heard, both Hark! A Vagrant, and her earlier book, Never Learn Anything From History are both super smart and nerdily funny and you should buy them.

And then come back here and thank me in the comments.
Posted by Annie at 7:46 PM 2 comments:

Still not sufficiently inspired?
Check out these brilliant ideas from Jillian Tamaki, via The Hairpin 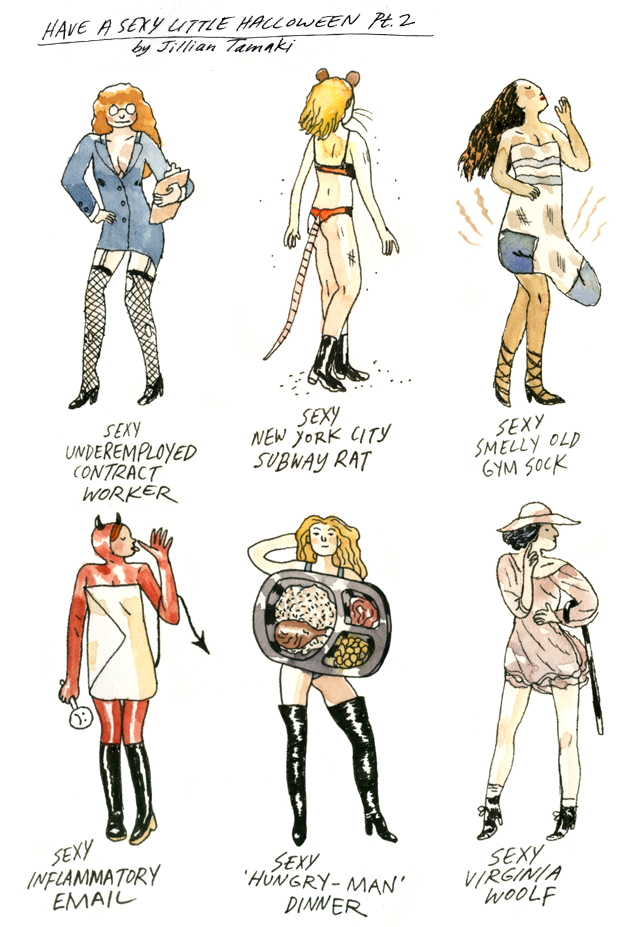 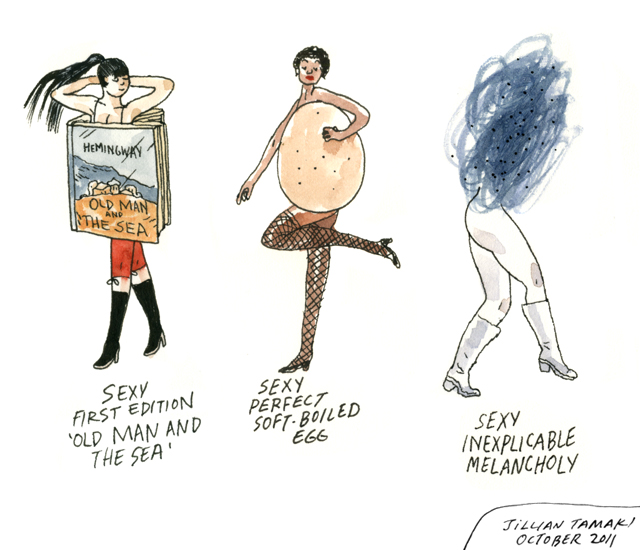 Have you looked at a calendar lately? It's practically Halloween RIGHT NOW!
What are you going to do for a costume, poke holes in a sheet and be a sexy ghost?
That's not gonna work this year!
Thankfully Dame Martha has posted some frightfully good ideas on her website. 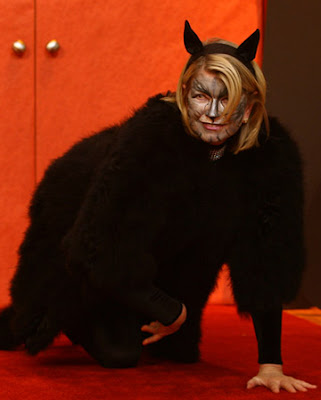 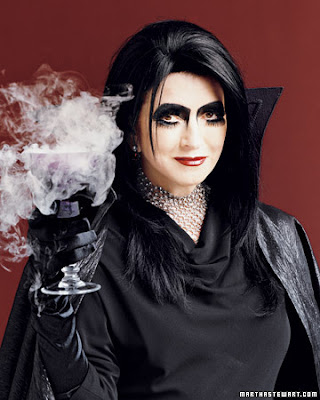 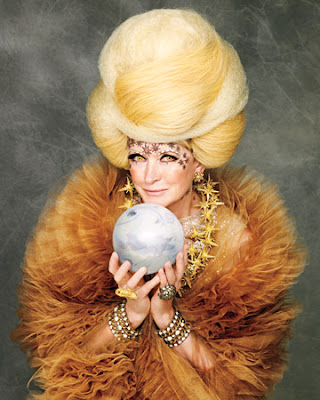 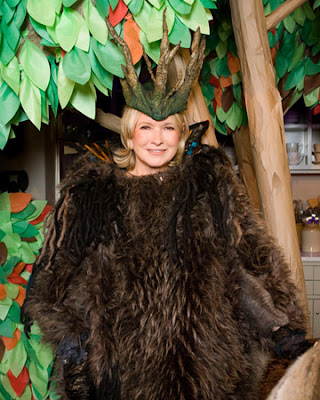 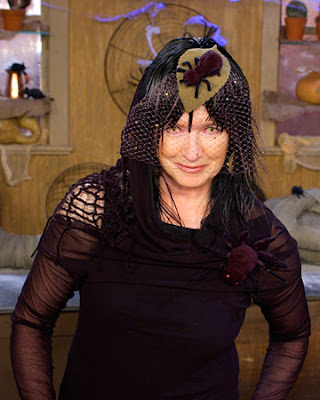 This one is called "Sophisticated Spider Witch." 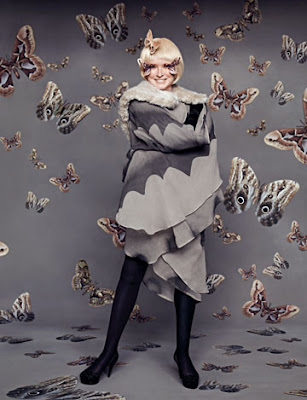 Or how about "Motha?"
Yes you heard me.
Genius.
Can we get a close up of those eyelashes? 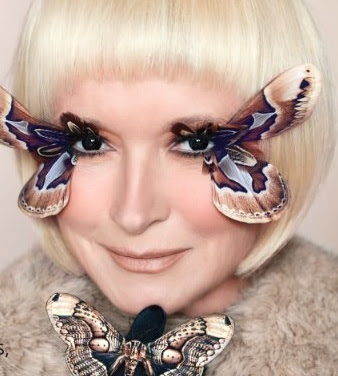 Head over to my new website to find out more about my tutoring services in the Los Angeles area!

I love to talk!

You can reach me at: Annie [dot] paperbuttons [at] gmail [dot]com